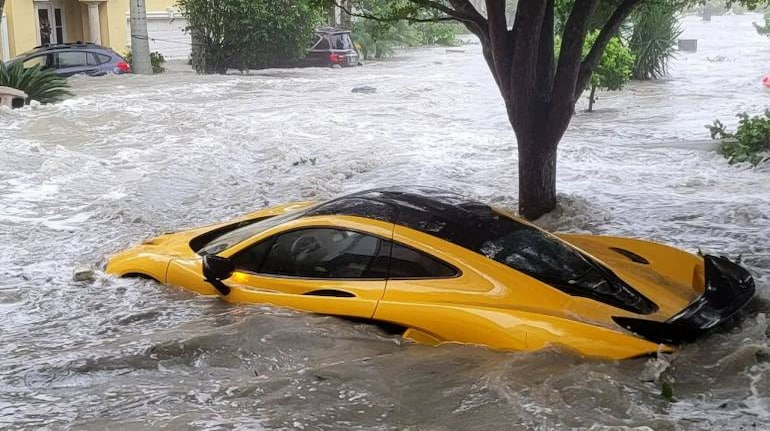 Many people have relocated to Florida during the pandemic, attracted by its affordable cost of living and pleasant weather. However, they may now be facing one of the most expensive and destructive hurricanes in American history.

For Florida's newest residents, Hurricane Ian is a harsh reminder of the risks of living in a state where sunshine and low taxes have drawn an influx of Americans in recent years.

Many people have relocated to Florida during the pandemic, attracted by its affordable cost of living and pleasant weather. However, they may now be facing one of the most expensive and destructive hurricanes in American history.

The storm caused extensive flooding, particularly on Florida’s Gulf Coast, and left millions of homes and businesses without power. With houses and infrastructure in ruin, estimates on the damage are as high as $100 billion. For many of the newcomers, it’s their first major natural disaster in a state that’s particularly prone to climate risks. Despite this, the state has still attracted throngs of people and businesses.

Andrew Ford, who moved to North Port from Nashville, Tennessee in July, is waiting to see if his new home will be livable after the storm. He put up storm shutters and placed sandbags around the doors before evacuating on Monday night, but isn't sure how much that will help.

The 34-year-old Atlanta Braves training facility employee spoke about the current situation, saying "it just sucks; it's horrible." They went on to say that at the current rate, they don't know when they'll be able to go back.

Florida has long been known as a haven for retirees and anyone trying to avoid harsh winters. However, in recent years the state has become a popular destination for city dwellers from New York, San Francisco, and Los Angeles who are seeking cheaper locales. This has led to a pandemic boom in the state, with house prices jumping by 67% in the Tampa area and 63% in Miami since March 2020, according to S&P CoreLogic Case-Shiller indexes. This is a significantly higher increase than the 41% seen nationally.

Jesse Keenan, associate professor of sustainable real estate at Tulane University in New Orleans, has warned that Florida's climate risks could make it less attractive to newcomers from more expensive states. Keenan said that these newcomers could discover that Florida is not the bargain they thought it was.

Sales and property taxes will have to go up to pay for the infrastructure needed to accommodate the largely unrestrained growth that Florida governments have permitted, along with the costs of rebuilding from Hurricane Ian. According to CoreLogic Inc., the estimated losses from the hurricane are $28 billion to $47 billion, making it the costliest Florida storm since Hurricane Andrew three decades ago."If you moved to Florida for the cheap housing and the sunshine, there's going to be a sticker shock," Keenan said. "Between property insurance and local taxes, you're going to pay for these costs one way or another."

According to Risk Factor, a data reporting tool from the nonprofit First Street Foundation, more than one-third of Florida's total properties face a greater than 26% chance of being severely affected by flooding within 30 years. However, flood damages are often not covered in home insurance policies, which could leave many people with new financial burdens.

The state's property insurance market was already in trouble before the storm hit, and it may not be able to recover, Keenan said. Some developments may be uninsurable because they'll be deemed too risky, while many thousands of homeowners will be left without insurance.The Florida real estate market has "not priced in the risk of hurricanes, climate change and weight of its own growth," Keenan said. "It has grown much faster than the infrastructure can keep up with."

There is no part of the United States that is free from risk these days. Climate change is causing more severe weather events across the country, from wildfires in California to extreme heat in Texas and tornadoes in the Midwest. Florida is just the latest place to be hit.

Carlo Hernandez moved to the Orlando area from Iowa just two weeks ago and was quickly greeted by the storm. He said that he was not expecting the weather to be so bad and that he was surprised by how much damage the storm had caused.

The 26-year-old acting freelancer watched in horror as trees fell on cars in his neighborhood, worried that his own would be totaled. While that hasn't happened, he's had to deal with power outages and flooding risks. It's been a tough few weeks for him, but he's grateful that his home and car are still intact. He never expected to deal with hurricanes when he decided to move to the east coast, but he doesn't regret his decision. The warmer climate was exactly what he was looking for.

Hernandez said that he knew there was a risk of bad weather when he moved to Florida, but he didn't think it would happen so soon. He added that he's still optimistic about Florida overall, since the weather is usually nice there.